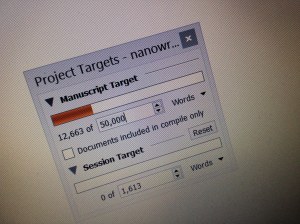 I don’t know why this goofy “challenge” calls to me, but it does. This will be my third year that I’m having a go at it, and you know, we’ll see. In 2012, I entered a book titled, “Untitled”, in the Supernatural/Horror genre. I logged in 8,202 words. (In case you don’t know, the goal is to write 50,000 words by November 30. The challenge starts on the first. You’re not supposed to cheat either. Cheating is bad. Also, fifty-thousand words is supposed to be considered a novel length manuscript, though it is a pretty flimsy one.) My success rate in 2012 was a sickly 16%. Looking back on the stats, it looked like I started late (Day 4, already 6,664 words behind) and then by day 15, I realized I was too far gone in the weeds to ever catch up, said fuck it, I want to do other things with my free time, like drink alcohol and watch lots of television. And I quit. I have a vague recollection of what that particular novel was about, but I don’t know what file any of it ended up in, so, enh, I obviously wasn’t too excited about it.

Next year will be so much better, I said. I am going to kick so much ass on nanowrimoexpialidocious.

In 2013 I entered a book titled, “Untitled”, in the mainstream fiction genre. I logged in 499 words. No, I’m not missing a zero. That is 0.99% of the required 50k to “win” (their word, not mine). The nanowrimothafucka organization uses the “winning” word kind of the way that Charlie Sheen would use it, which is to say, you don’t win a damn thing except bragging rights and some low value street cred to other writer nerds. So let’s check out last year’s stats: On Day 9 (that’s over a week late, very bad start already), I wrote 499 words…about something. Who knows what it was about, maybe what my cat was thinking. And then on the very same day, I said, fuck this, I’d rather drink alcohol and  watch a lot of television, and called it a night on the 2013 challenge.

THIS YEAR. I’m doing pretty good. For real this time. I started on damn Day 1 and have contributed every day since (except today. I’m writing this. Why am I writing a blog post? I should be writing my 30 day novel!) I have entered a book titled, “Untitled” in the Thriller/Suspense genre. As of today, Day 8, I’m logging 12,663 words. Not a bad start, eh? My personal best so far. Although the target for today is supposed to be 13,333 words by midnight. That shouldn’t be too difficult, it’s only a difference of 670 words to stay on track (although, that would have been too much for me on any day in November in 2013, but I won’t dwell on my failures).

So, what’s the point of all this, and why is there math involved?

Because there are many arguments for and against this writing marathon.

For) Why is nanowrimoliscious an awesome way to spend ones free time in November? Well, it gives wannabe authors the mental kick in the ass they need to condition themselves to Write.Every.Day.No.Matter.What. Sounds like good, solid advice, yeah? Because we all know that Great American Novel is not going to get written while waiting for the perfect time to write it (never).

Against) Why is nanowrimotimesink the stupidest thing you can do if you’re human? Because 99.9% of what is written during this challenge is unusable. As in pig snot. As in my cat can type out more lyrically beautiful sentences than the potpiss I’m throwing up on my monitor screen. So, why again, do we do this?

I’ll tell you. Listen up.

I am of the school that says you need to write out your mistakes. Kind of like in order to be a teacher, or a nurse, or a minister, or refrigerator repair person, whatever, you need to pay your dues and spend some time safely screwing up. It’s similar to an intern position. You have to be a stupid writer before you can be an awesome writer. If you’re logging a lot of hours, slogging away at your desk trying to write a halfway decent sentence, someday, even if just by accident, you will write a sentence so awesome it will make your keyboard want to cry. Just by the magical process of working everyday on this insanity we have convinced ourselves is “art”, we will become better at it.

Remember when you were a kid and your mom and your piano teacher nagged the shit out of you to practice your scales and arpeggios 500 times before you screwed off for the night? It’s the same thing.. If we practice our scales on the typewriter, we will soon be producing beautiful sonatas and ballads and hell, maybe even the stuff of Elton John or Alicia Key, and why am I talking about music still…

The point it is, do it like your piano teacher told you. You can’t get better until you practice, there’s no getting around it. (The piano teacher in my head has a Russian accent. Scary.) So, that is why I torture myself every year, with mixed results, with NaNoWriMo, because I want to be a better writer. It is my right of passage. If I work hard, and purge myself of all my crappy writing now, sooner or later, the bottle of mediocre will run dry and cease all together.

What I’m Reading Now:  The Witches of Eastwick (still) by John Updike

Freelance Writer, Journalist, Editor, and Jill of All Language Trades

it's dark out there - and other literary musings

Hiking with my Brother

it's dark out there - and other literary musings

A place to talk about the journey...

Hey Did You Know I Write Books

Someday, what follows will be referred to as “his early works.”